We very much want the new normal to be somewhat reminiscent of the old normal so it’s unlikely we will be opening in July.

Simply put I don’t feel that within the current guidelines we can operate safely, profitably and in any way reminiscent of what we were doing before.

I feel that the bar is and always has been the beating heart of our operation & until we can see the whites of your eyes (and lick them) we will hold fire. Don’t even get me started on how to safely operate a socially distant kitchen!

We want to create a safe environment for staff and patrons alike so in the meantime please support us through The DB Bottle Shop. We want to come back, and we will, but we want to get it right.

Hello. We are now delivering beer and other bits locally from The DB Bottle Shop. You can use this handy link

and as long as you spend £20 or over we’ll bother to get out of bed and bring it to you. It’s new & online and I made it so if its broken, don’t cry about it, just email me instead. hello@thedrawingboard.pub

We will deliver in a relatively timely fashion and leave it on your doorstep. We will be social distancing so don’t ask us to put it away for you.

As time passes we’ll upload more stuff you can buy but its all slightly dependent on how much stock we can afford/get hold of and how much I fall back in love with this Playstation. Swings and roundabouts.

So look, we’re closing the doors tonight at 10pm and we’ll remain closed for the foreseeable.

It sucks, though we haven’t had any clear direction from the government we feel that it doesn’t sit right that we remain open for both customers & staff alike.

It’s almost five years since we opened our doors at The DB and for those of you that know us, know we certainly don’t do this lightly. We’ll be open again as soon as it’s safe, keep an eye out for that bat signal!

In the meantime the DB Bottle Shop on Court Street remains open and delivering – our new Shopify site will be up and running over the weekend. Craft beer, Cider, Japanese Whisky & Artisan spirits – y’know the important stuff!

Thanks for all your kind messages, support and love.

Please don’t loot us it’s probably not covered under the insurance either.

You can now take food from The DB safely home with the Drawing Board Take Out Menu Available 12-3, 5.30 – 9pm today anyway – we’re making it up as we go along… 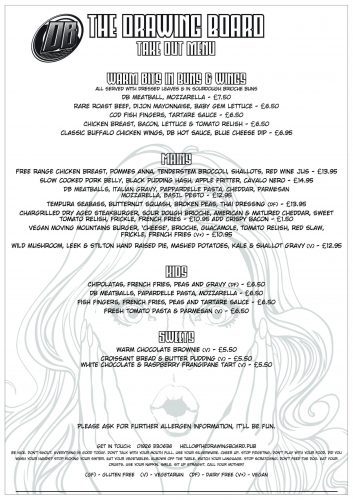 We, at The Drawing Board offer our own take on spectacular gift vouchers with the magical DB Dollars*. These fantastic pieces of premium, shiny card are available in three (yes three) denominations. £5, £10 & £20 – It’s only mildly confusing as they are called dollars but actually are £. That aside you can use them at The Drawing Board pub in Leamington Spa like they are made of real money, you know for food and drink and that.

They work as ideal Birthday presents, Christmas presents or just plain old ‘presents’ presents (even new ones, maybe) They might even be used as gestures of support for small independent pubs that are mildly concerned about the current state of affairs.

You can buy them over the telephone, in person or through a window and we will either give them to you or post them to you as they are physical collectible things.

(*may not be magical, fantastic, collectible or spectacular)

There are certain types of people that thrive in a busy, chatty, friendly environment – if you feel that you’re one of them, we’d love for you to join us – we can teach you the rest.

Alternatively come to an interview that we stare at you and wonder why you thought it was a good idea.

If you fancy a natter, drop us an email hello@thedrawingboard.pub 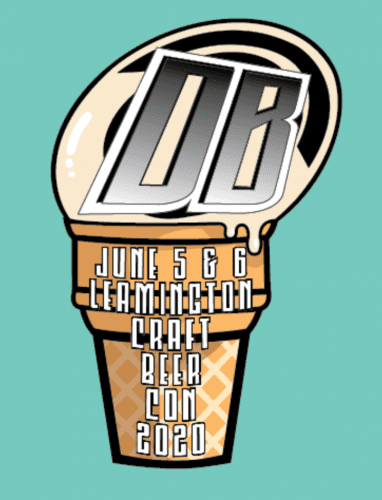 Save the date there’s a Craft Beer Con coming your way. June 5th & 6th 2020 to be precise. More deets to follow but you can bank on some important names, street food & live music.

Tiny rebel are back at The DB Bottle Shop on Thursday, January 30th.
Adam is bringing a rather special limited edition DB Stay Puft as well as some rather sexy Tiny Rebel cans & draught. More details to follow… Save the date! 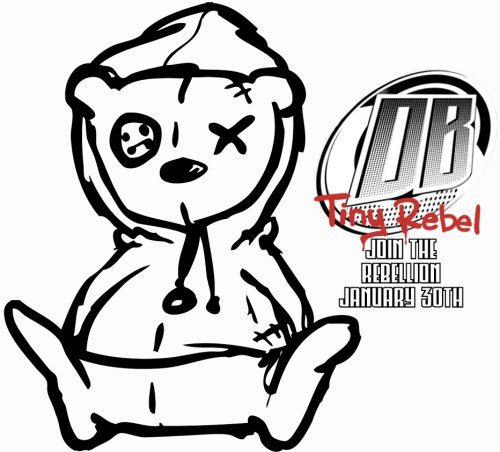 We have another new brew on the go, this time with our friends at Church Farm Brewery in Warwick.
Camoufleur IPA will be available rather soon as a permanent listing at The DB for your facial hoofing. Taking its cues from certain bar favourites we’re hoping it’ll do well. Camoufleur takes its name from the WW2 Leamington Spa based artists who were tasked with concealing important sites from enemy aircraft & submarines.

Obviously I have a personal obsession with Camo but to be able to celebrate it with a beer is a bit of a bucket list win! 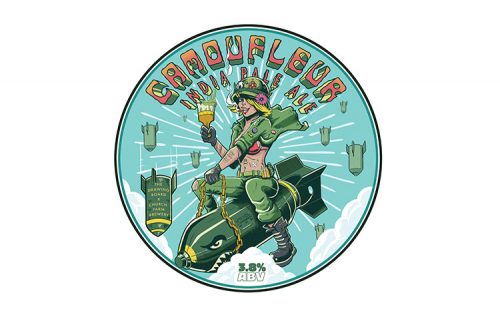 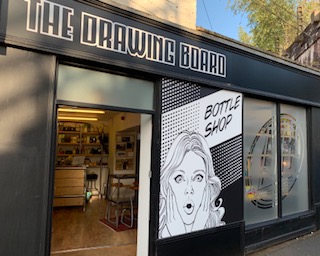 So a few weeks ago we opened The DB Bottle Shop on Court Street at the bottom of Leamington. It’s a craft beer orientated shop specialising in Japanese whisky & artisan liquor. We wanted to have a bit of a play with some more interesting stuff that we can’t sell at The DB for one reason or another. You can drink in or take away and we’ve got some exceptionally cool beers on show. Taps are being fitted later in the month but you can find our latest beer selection on Untappd under The Drawing Board – theres about 136.
We’re open Tuesday – Saturday 12-7pm. You can follow us on all the usual social media channels @thedbbottleshop 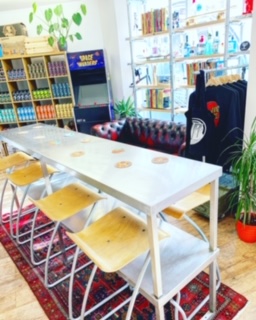 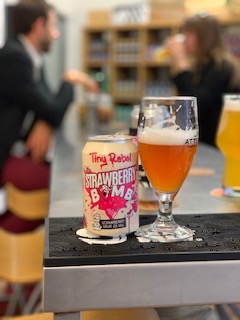